Guest column: Like it or not, Kobach parade float represents nation’s democratic values 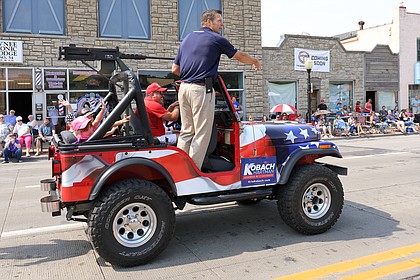 Marty Augustine/Special to the Dispatch

Parades are a time for a community to come together.

These events have always been a melting pot of politicians looking for votes, churches seeking new members, businesses looking for customers, bands and dancers showing off their talent and patriotic displays, which sometimes involve weapons.

Regarding the recent controversy involving Kris Kobach and his vehicle entry in the Old Shawnee Days and Lenexa parades, it would seem the underlying issue causing distress is not the imitation weapon mounted on his vehicle, but rather the person who was riding in it.

There have been countless parade entries in previous years where weapons (real or prop) were displayed.

Military vehicles, Veterans of Foreign Wars, Color Guards, Law Enforcement Honor Guard units and even armed on-duty police officers have all been in our parades.

There were some parade entries which I and perhaps others may have been opposed to, but as a rational adult I simply watched them pass by thinking to myself “that probably won’t win an award this year,” as I excitedly waited for the next entry to pass.

Never once in any parade I’ve ever attended in my life have I felt offended, outraged or in fear because of an entry. This parade was no different.

However, after the Old Shawnee Days parade when I heard about the interim Shawnee City Manager issuing an apology about Kobach and his entry, my feelings changed.

Suddenly I did feel offended, outraged and in fear, but not because of the parade entry.

I was offended because the apology issued by the city did not represent the feelings of everyone in attendance at the parade, including myself.

Whether you like him or not, Kobach did nothing wrong.

He did not violate any laws, nor did he violate any policy set forth by the parade organizers. In addition, none of his actions were threatening or unsafe (keep in mind the fake prop “weapon” was incapable of firing live ammunition).

Some parade watchers said Kobach’s entry was “distasteful” and “insensitive”.

The only thing distasteful and insensitive about the parade entry was the immature reactions afterward.

The city of Shawnee had no reason to interject an apology because the city did nothing wrong.

I was outraged because I learned the apology was made without the knowledge or approval of Mayor Michelle Distler.

Undue national embarrassment was brought upon our city because of rogue politics.

After the dust settled in the days following, Distler should have made a public statement about the unauthorized apology and the damage it did to our city’s reputation, but she didn’t.

As such, we were left with only the negative, often untrue version of the story social media and news outlets presented us with.

It was made to seem the city had in fact done something wrong by allowing Kobach and his parade entry.

I was in fear because of the ignorance shown by those who opposed the entry.

Many called for future bans on similar parade entries.

Other than restricting free speech and setting a dangerous precedent, what would this solve?

Should we not allow marching bands because someone doesn’t like the song they play?

Should we ban church entries because we disagree with their religion?

Everyone is going to be offended by something, so where will it stop? The answer is it won’t.

This type of knee-jerk reaction often causes more issues than the original problem.

Banning something or making a new policy every time someone is offended is not the answer to the problems in our society, especially when it stems from something that is purely perceived opinion, not an actual public safety threat or oppressive act.

These things should have been promptly stated by Distler.

While the city did not have a need to issue an apology, our mayor did have a civic duty to step forward to explain how a democratic society works.

It’s not likely any statement she made would have swayed the opinions of those who oppose Kobach and his actions, but it would have shown the overwhelming majority of Shawnee residents who aren’t overly sensitive that our city leader has common sense and a backbone.

In America, we are afforded choices.

If you don’t like Kris Kobach and what he represents, don’t vote for him. It’s that simple.

But the media coverage and the comments made by those who were offended demonstrated this was nothing more than a biased attack on Kobach because of his views and political alignment.

Had a Democratic candidate done the same thing, would the outcry be the same?

It’s a shame our nation is so drastically politically divided we can’t we have just one day (a parade) where everyone can sit back, relax and have fun for a couple of hours without throwing a tantrum.

The Old Shawnee Days parade is, and has always been one of the best events in the region.

Hopefully the event organizers and the city can use a little common sense to not mess with what has been a good thing.

No one needs to be banned. No new policies need to be written. The only thing that does need to change is for our civic leaders to stop caving in to nonsense.

If you decide to come out for next year’s parade, please keep your politics at home.

If you feel you might be offended by what you see at the parade, maybe you should stay home, too.

Count me as a Shawnee resident opposed to Mr Kobach's insensitive pandering to gun enthusiasts (but dont worry, I'm not offended by you referring to me as "ignorant"). There is so much false equivalency and hypocrisy in this "guest column" I scarcely know where to begin. Let's start with equating Kobach's wrapping himself in the flag and flaunting a military weapon with churches and marching bands. Really? So by that logic, we should allow any parade entry no matter how offensive. Would the KKK be OK? Nude dancers all right? No?
Then there is a line, you just disagree on where it should be. And yes, it's fine if military or law enforcement display guns. Because they are military and law enforcement! You implore us to "keep our politics at home", because we dont agree with a politician who was making a clear political statement? That doesn't even make sense. This wasn't about Democrat or Republican, it was about his ridiculous behavior. You dragged the political parties (and therefore divisiveness) into this. No one was upset about the other Republican candidates. Despite the hollow arguments, seems to me what you're most offended by is that people who disagree with you spoke up. Thankfully, to your point, we live in America, and because I dont like Kris Kobach, I won't vote for him. AND we can speak out about his inappropriate behavior.